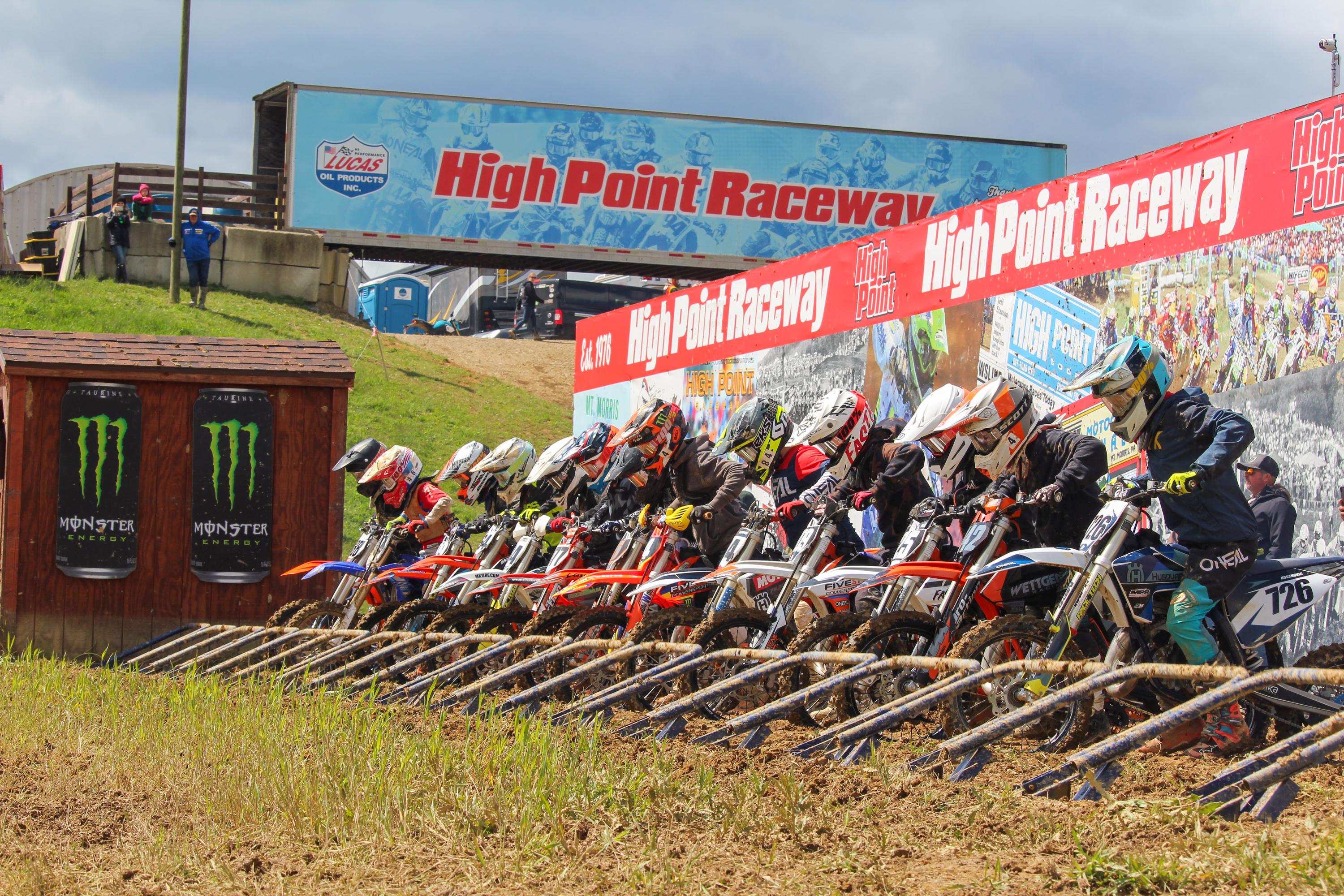 MOUNT MORRIS, Pa. (May 12, 2021) – High Point Raceway hosted one of the final Northeast Area Qualifiers over the past weekend, May 8 and 9. This event was held in conjunction with PAMX’s Fasthouse Spring Championship Series presented by MX Tire. Weather conditions would impact the event throughout the entire weekend, with an abbreviated practice schedule on Friday, to one moto format racing on Sunday. Even with the weather conditions, over 620 entries and 326 individual riders came out to enjoy a weekend of racing.

Saturday saw the best conditions of the weekend, with cool and partly cloudy temperatures throughout the day. The 450 B Limited class would come to line with Pennsylvania’s own Rilan Gombert taking the overall win. Cole Jones went 2-2 for second overall, while Calen Suto finished third overall on the day in 450 B Limited.

In the 250 C Limited class it was Talon Thompson going 2-2 for first overall, while Blake Grindstaff went 1-3 for a second place finishing position. Peyton Crisp rounded out the top three overall after going 5-1 on the day. The 250 C Jr. (12-17) Limited class saw another Pennsylvania native; Jaydon McCurdy go 1-1 on the day to take the win. Donavan Sante and Peyton Crisp came through to take second and third with James Grace and Talon Thompson rounding out the top five overall.

When the 250 B Limited class hit the track, it was Rilan Gombert once again going 1-1 to take the win on Saturday. Cole Jones would come through with a 6-2 score on the day for second overall followed by Santiago Rosenzweig earning third overall. Avery Bryant, Diesel Geerdts finished fourth and fifth overall in the class.

McCurdy would come back out in the 125 C class and go 1-1 earning his second overall win of the weekend. Jacob Hull and James Grace would swap positions each moto finishing 4-3 and 3-4 for second and third overall in the class. Donavan Sante and Brayden Winstel battled back throughout the day to bring home the fourth and fifth place finishes aboard their 125cc motorcycles.

Parker Bonnett came through to finish 2-2 in the Schoolboy 1 (12-17) B/C, earning him the overall #1 spot in the class. Nathan Dulaney would battle back after earning the moto one win, to finish third in the second moto for second overall. Jack Winland and Jacob Hull finished third and fourth, while Breyden Campbell went 7-7 for fifth overall. Returning from an injury was Myles Gilmore who went 6-8 for sixth overall.

In the Women’s class it was Florida’s Aura Schmelyn going 1-1, while Morgan Johnson and Tiffany Fanala went 2-2 and 3-3 to round out the top three overall women. Madison Stankus, Gabby Dombrowski and Gracie Reis rounded out the top six qualifying finishers in the class. Hannah Sipe went 1-1 in the Girls (11-16) with Madison Musguire and Bailey Walker rounding out the top three. Rhyley Forrest and Harper Currens came through to finish fourth and fifth overall in the class.

After practicing earlier in the day on Saturday, the Mini-E (4-6) Jr. class Tate Boano would take the overall win, as Jace Wolfe went 3-3 for second overall and earned himself the top qualifying position. Leo Tomlinson, Abshur Hall and Daxton Mullins battled to finish in the top five positions of the Mini-E class. In the 51cc (4-6) Shaft Drive Limited it would be Ohio’s Talon Robertson going 1-1 for an overall victory, as Ezra Hicks went 2-2 for second overall and Kaverick Stewart came through to earn third.

Blaze Wolfe brought home the overall win in the 51cc (7-8) Sr. Limited class, followed by Owen Salamon and Collin Shaeffer in second and third. Levi Cornett and Owen Tomlinson rounded out the top five. In the Jr. Limited class, it was Gavyn Welzien and Tate Boano earning the top two spots in the class.

In the 65cc (7-9) Limited it was Jeffrey Drysdale going 1-1, while Gavin Abboud went 2-2 and Ethan Deel finished 3-3 on the day. During the 65cc (10-11) Limited class it was Trenton Burton earning the second moto win to give him the advantage of an overall win, as Sam O’Leary went 1-3 for second overall.

After going 2-1 on the day in the 85cc (10-12) Limited class it was Cole Lute who took the overall as Christopher Wittman went 3-2 for second. Seven Henderson went 1-5 to earn a third overall on the day, as Jayden Struble and Leeland Pfeiffer finished fourth and fifth in the class.

On Sunday morning, racers and crew members were greeted with rainy and cold conditions. Track crew were in full force working on the track to make it the best possible track it could be with the conditions. As the races got underway it was the 65cc (7-9) and 65cc (10-11) up first to tackle the conditions.

Evan Deel grabbed the first win of Sunday, with Gavin Abboud and Brayden Wettgen finishing second and third. Keegan McDade and Brazen Hendren rounded out the top five finishers in the 7-9 age group. In the 10-11 age group it was Trenton Burton earning the moto win with Logan Webb and Brody Gay rounding out the top three.

In the 450 B moto it was the No. 94 of Cole Jones coming through to take the win with Conner Lawrence and Brian Saunier Jr. battled to qualify in the second and third place positions. Also qualifying onto the Regional Championship will be Santiago Rosenzweig, Jacob Ellis, Maddison Booth, Hayden Robertson, Timothy Kretzler and Aiden Birckbichler.

Kobe Heffner out of Georgia battled through the conditions on Sunday in the Open Pro Sport to come through and take the class win. Florida’s Jack Chambers would come through second after battling with Cullin Park, who finished third. Jarrett Thompson and Griffin Maxwell rounded out the top five finishers in Open Pro Sport, while Ethan Lane, Klay Prager, Cole Bradford and Andrew Adamcik qualified top 9 onto the regional.

In the 65cc C (7-11) PAMX class it was Keegan McDade taking the class win with Brayden Wettgen and Trigger Harkins battling behind him for the second and third place positions, while Skylar Bentley finished fourth in the moto.

Cole Jones would come through again to take the 250 B class win while Jacob Lesko would come through second and Jacob Ingram in third. Ingram would take second in the qualifying with Jacob Ellis taking fourth in the race and third in qualifying. Santiago Rosenzweig came through fifth with a fourth place Q. Reece Clason, Justin Ruetschi, Myles Gilmore, Brian Saunier Jr and Maddison Booth battled to round out the top nine qualifiers in the 250 B class at High Point.

Mini Sr 2 (13-15) competitor, Austin Schafer earned the moto win while Jeremy Roe and Gage Spaun came through behind him to round out the top three finishers. Thor Powell and Colton McKnight battled for the fourth and fifth place positions. In the PAMX Jr. Mini class it was brothers, Colton Wettgen and Brayden Wettgen going 1-2 in the moto.

Blake Grindstaff and Talon Thompson would battle in Sunday’s 250 C moto. Grindstaff would come out victorious as Thompson came through in second. Ty Ely rounded out the top three with a third place finish. Jeremy Liston and Conner Mowery battled back to round out the top five finishers. Caden Mitchell, Braden Kruger, Lane Bates and Ralph Rauso rounded out the top 9 qualifiers in 250 C.

In the Vet (30+) class it was West Virginia’s Jordan Oxley earning the win ahead of James Singer and Jetti Pifer. Christopher Corcoran and Ryan Scialabba rounded out the top five finishers as Ryan Gould battle back to a sixth place qualifying position. Dan Dierdorf, James Fullen and Jake Curry rounded out the top 9 finishers in a qualifying position. In the Senior 40+ class it was Christopher Opliger edging out Fredrick Griffith for the win. However, in the Senior 45+ class it would be Griffith taking the qualifying win with Jess Stankus finishing right behind him. Brett White would take third in the Senior 40 and 45+ classes.

Richie Kronk won the 30+C PAMX class with Derek Hill and Isaac McGinnis coming through second and third. Thomas Nagle II and Thomas Nagle I, rounded out the top five finishers in the class.

The Schoolboy 2 (12-17) B/C class win went to Santiago Rosenzweig, while Talon Thompson and Myles Gilmore came through to finish second and third. In the PAMX 250 All-Star A/B class it was Jarrett Thompson earning the win with Jacob Lesko and Christian McCauley coming through to round out the top three.

Luke Fauser earned the Supermini 2 (13-16) class win with Nathan McLaughlin finishing second and Colt Golembeski coming through in third. Cash Jones and Gage Spaun would round out the top five finishers in the class. Then in the 85cc (10-12) it was Pennsylvania’s Cole Lute earning the moto win followed by Christopher Wittman and Seven Henderson.

Coming through to earn the College (18-24) win was Jarrett Thompson, followed by Cole Jones and Griffin Maxwell finishing second and third. Brandon Arney and Jacob Ingram rounded out the top five in the class. Then in the Junior 25+ it would be Jimmy Knisley taking the checkered flag first with James Singer earning the second qualifying position with a third place finish in the class. Jordan Oxley, Joshua Liston and James Fullen rounded out the top five qualifiers.

In the PAMX 85cc C class it would be Jayce Eicher, Madison Musquire and Carmello Shannon would round out the top three. Colton Wettgen earned the 85/150 B PAMX class win. In the Bomber PAMX class Jess Stankus earned the win, while the 60+ PAMX class saw Thomas Nagle I earn the moto win. In the Open D class for the PAMX series, Ashton Jasper took the win, while in the 2-Stroke class it was Chase Bonamo coming through first. Richard Trunzo and Matthew Cempa went 1-2 in 40+ B/C.

Grindstaff would earn the 450 C class win ahead of Pennsylvania’s Ty Ely and West Virginia’s Eli Aberegg. Jacob Verran and Richie Kronk came through to round out the top five finisher in the class, while Joshua Cavar, Jeremy Liston, Ralph Rauso and Sawyer Shoemake made up the top 9 qualifiers out of the 450 C class.

Taking the 125cc (12-17) B/C moto win was Nathan Dulaney just ahead of Chalice Stiers and Parker Bonnett. Myles Gilmore finished fourth qualifier and sixth in the moto with Broxon Dean, Josiah Dick and Jack Winland rounding out the top 7 finishers.

High Point Raceway looks forward to seeing everyone at High Point Raceway this year. No matter what your preferred style of racing is, there is an event for you. Admission and registration processes will follow strict social distancing and hygiene guidelines, as recommended by the Centers for Disease Control and Prevention (CDC).